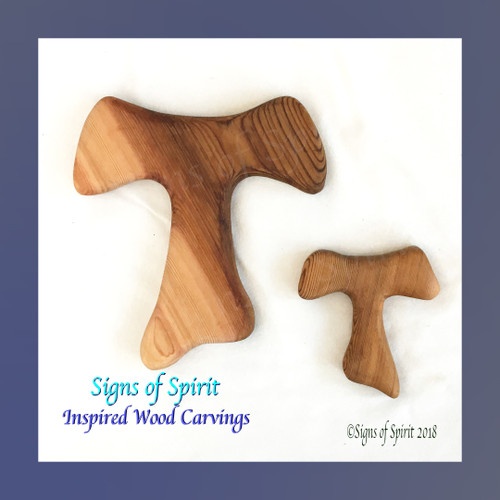 St. Francis of Assisi used the Tau for his signature and as the key symbol of what all Franciscans are called to be. It is one of the smallest letters of the Greek alphabet and the last letter of the Hebrew alphabet. For Francis, the Tau resembled the cross of Christ and reminded him of the smallest and poorest of the world. “It is in our poverty that we become, like Jesus, the Image of the Divine. The Tau for Franciscans is both a reminder of our commitment to stand with the poorest of the poor and of the promise Jesus made to the needy and broken-hearted, that in the Kingdom, ‘…the last shall be first and the first shall be last.’ It is our hope and our goal that in educating and forming the whole person, the presence of Christ is revealed through and in the ministerial life of each of our graduates.”

Tau is a very old symbol and has diverse connotations:

The ANCIENT GREEK considered Tau to be symbolic of life and resurrection, while ‘theta’, the 8th letter of the alphabet was used to denote death.

In ANCIENT EGYPT, the Tau symbol was thought to represent a phallus and was also regarded as the marker for holy waters.

Ancient mythology associates the symbol with the Greek deity Attis and the Roman god Mithra or Mithras. Several Western religious traditions and European cultures associate Tau with the crucifix.

According to KABBALISTIC BELIEFS, the symbol refers to the mystical number three and signifies intuition, magic, creativity, and expansion.

In the Freemasonry, Templar or Rosicrucian symbology, Tau stands for the all-pervasive God and Its 3 attributes of strength, wisdom, and harmony.

THE CARVING:  Our carvings are single pieces of western red cedar, designed and carved to be wall hangings.  Each carving begins as a 1 X 12-inch cedar board.  While we use power tools (Scroll Saw, Rotary shaft Tool, handheld detail sanders etc.), we use no lasers, CNC machines or computer-operated cutting machines.  All work is done with our hands and eyes…

We cut the 2-dimensional blanks with scroll and jigsaws (double-sized custom orders have to be cut with a jigsaw). Carving is done with rotary shaft tools and disc grinders. The 80 grit sanding is the final phase of the carving process, removing the nicks and gouges from the carving tools, and finishes the shaping of the weave. The next 2 sandings with 120 then 220 grit finishes the smoothing and polishing. They are immersed in Clear Danish Oil to seal the piece, bringing out the grain and the color.

MSRP:
Was:
Now: $48.00
!
The pictures you see here are stock photos. What you get will depend on what we have in stock. If there are no others in stock, the time to shipping will be increased. If you desire and request something (for example) dark, we will pull the darkest board we have, but it will not necessarily be as dark as (for example) walnut would be. Western Red Cedar is the species from which roofing shingles, decks, and gazeboes have traditionally been made. It is resistant to mold, moisture, and insects. The oiling process also helps to block out damaging UV rays of the sun, so our carvings can be hung outdoors. Please be aware, that even with the oiling, the carving will eventually gray out, as any cedar will, if it is placed in direct sunlight.   SIZE OF THE CARVINGS: The stock carvings are limited by the size of the board that starts the carving process. As the initial piece is 1 in. x 12 in., (in reality 3/4 in. x 11-3/4 in.) one side of the carving will be no greater then approximately 11-1/2 in.