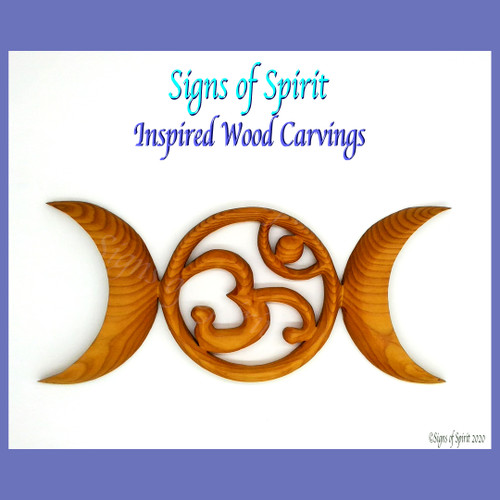 Coop has placed a Sanskrit OM in the full moon position of the Celtic Triple Moon carving.  This is a wonderful combination for those that use the practice of yoga to enhance their nature driven worship...or visa versa!

MEANING OF TRIPLE MOON: The Triple Moon represents the Phases of the Moon which are linked to the three aspects of the Goddess and the phases of the Life of Women. While this is based on the Ancient Celtic Goddesses, this could represent any trinity of Goddesses…or Gods…from other cultures and traditions.

MEANING of OM: The sanskrit symbol of the sound of the Universe at total Peace. Om (also spelled Aum) is a Hindu sacred sound that is considered the greatest of all mantras. Om is composed of the three sounds a-u-m (in Sanskrit, the vowels a and u combine to become o) and the symbol's threefold nature is central to its meaning. It represent several important triads:

Thus Om mystically embodies the essence of the entire universe. This meaning is further deepened by the Indian philosophical belief that God first created sound and the universe arose from it. As the most sacred sound, Om is the root of the universe and everything that exists and it continues to hold everything together.

Our carvings are single pieces of western red cedar, designed and carved to be wall hangings.  Each carving begins as a 1 X 12 inch cedar board.  While we use power tools (Scroll Saw, Rotary shaft Tool, handheld detail sanders etc.), we use no laser’s, CNC machines or computer operated cutting machines.  All work is done with our hands and eyes…

We cut the 2 dimensional blanks with scroll and jig saws (double-sized custom orders have to be cut with jigsaw). Carving is done with rotary shaft tools and disc grinders. The 80 grit sanding is the final phase of the carving process, removing the nicks and gouges from the carving tools, and finishes the shaping of the weave. The next 2 sandings with 120 then 220 grit finishes the smoothing and polishing. They are finished with Clear Danish Oil to seal the piece, bringing out the grain and the color.

Goddess with Pentacle-Drawing Down the Moon Sacred Feminine Wood Carving

MSRP:
Was:
Now: $285.00
!
The pictures you see here are stock photos. What you get will depend on what we have in stock. If there are no others in stock, the time to shipping will be increased. If you desire and request something (for example) dark, we will pull the darkest board we have, but it will not necessarily be as dark as (for example) walnut would be. Western Red Cedar is the species from which roofing shingles, decks, and gazeboes have traditionally been made. It is resistant to mold, moisture, and insects. The oiling process also helps to block out damaging UV rays of the sun, so our carvings can be hung outdoors. Please be aware, that even with the oiling, the carving will eventually gray out, as any cedar will, if it is placed in direct sunlight.   SIZE OF THE CARVINGS: The stock carvings are limited by the size of the board that starts the carving process. As the initial piece is 1 in. x 12 in., (in reality 3/4 in. x 11-3/4 in.) one side of the carving will be no greater then approximately 11-1/2 in.