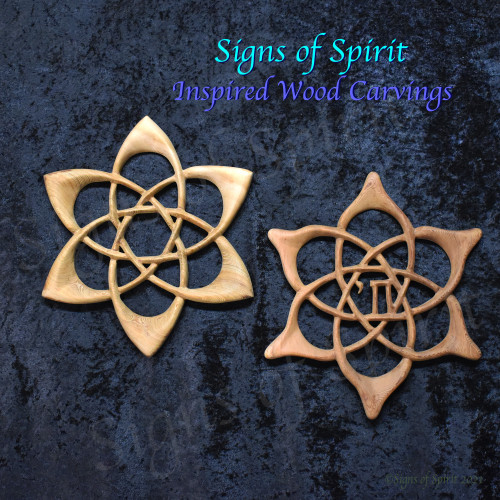 The Star of David, also called the Shield of David or the Magen David, is a recognized symbol of Jewish identity and Judaism. Coop designed this Six Pointed Flower shaped Hidden Star of David.  Inspired by the Lotus Pentacle, he endeavored and succeeded in creating a Lotus Star of David!

At a customer request he was inspired to do a variation with the Hebrew Chai within the center. So you have 2 options that would work wonderfully in a Jewish home, office or Temple! Appropriate gift for Rabbi or Temple.

This symbol is also used in Hinduism (see below) and would be harmonious in a Yoga studio, Meditation room, etc.

TRADITIONAL MEANING OF THE JEWISH STAR OF DAVID: There are many ideas about the symbolic meaning of the Star of David. Some Kabbalist thought that the six points represented God's absolute rule over the universe in all six directions: north, south, east, west, up and down. They also believed that the triangles represented humanity’s dual nature – good and evil – and that the star could be used as protection against evil spirits.

The structure of the star, with two overlapping triangles, has also been thought to represent the relationship between God and the Jewish people. The star that points up symbolizes God and the star that points down represents us here on earth. Yet others have noticed that there are twelve sides on the triangle, perhaps representing the Twelve Tribes.

The symbol’s association with King David comes mostly from Jewish legend. For instance, there is a midrash which says that when David was a teen he fought the enemy King Nimrod. David's shield was composed of two interlocking triangles attached to the back of a round shield and at one point the battle became so intense that that the two triangles were fused together. David won the battle and the two triangles were henceforth known as the Shield of David. This story, of course, is just one of many.

IN HINDUISM: The six-pointed star from two interlocking triangles is known as the Shatkona. The upper triangle stands for Shiva and the lower for Shakti, representing both male and female, a symbol of divine union and the source of all creation. This union gave birth to Sanat Kumara, an “Advanced Being” thought to be the head of the Spiritual Hierarchy of Earth who dwells in Shamballah.

Our carvings are single pieces of western red cedar, designed and carved to be wall hangings.  Each carving begins as a 1 X 12 inch cedar board.  While we use power tools (Scroll Saw, Rotary shaft Tool, handheld detail sanders etc.), we use no laser’s, CNC machines or computer operated cutting machines.  All work is done with our hands and eyes…

We cut the 2 dimensional blanks with scroll and jig saws (double-sized custom orders have to be cut with jigsaw). Carving is done with rotary shaft tools and disc grinders. The 80 grit sanding is the final phase of the carving process, removing the nicks and gouges from the carving tools, and finishes the shaping of the weave. The next 2 sandings with 120 then 220 grit finishes the smoothing and polishing. They are finished with Clear Danish Oil to seal the piece, bringing out the grain and the color

MSRP:
Was:
Now: $72.00
!
The pictures you see here are stock photos. What you get will depend on what we have in stock. If there are no others in stock, the time to shipping will be increased. If you desire and request something (for example) dark, we will pull the darkest board we have, but it will not necessarily be as dark as (for example) walnut would be. Western Red Cedar is the species from which roofing shingles, decks, and gazeboes have traditionally been made. It is resistant to mold, moisture, and insects. The oiling process also helps to block out damaging UV rays of the sun, so our carvings can be hung outdoors. Please be aware, that even with the oiling, the carving will eventually gray out, as any cedar will, if it is placed in direct sunlight.   SIZE OF THE CARVINGS: The stock carvings are limited by the size of the board that starts the carving process. As the initial piece is 1 in. x 12 in., (in reality 3/4 in. x 11-3/4 in.) one side of the carving will be no greater then approximately 11-1/2 in.